The day turned out to be a lot more fun and surprises than how I imagined when my friend David Tsvaygenbaum asked me to join the trek to the Mt Solomon the day before. David is an excellent multilingual desert tour guide as well as highly experienced dive guide who is based in Eilat by the Red Sea in southern Israel. 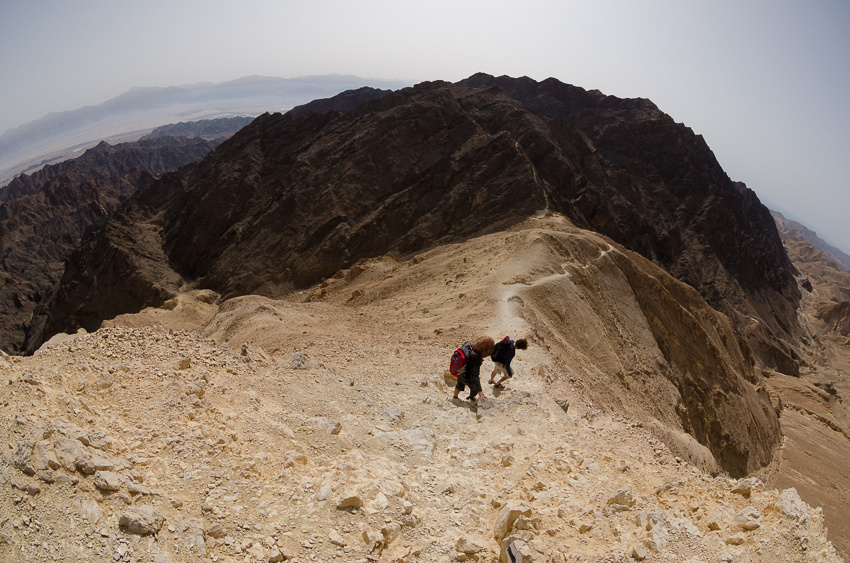 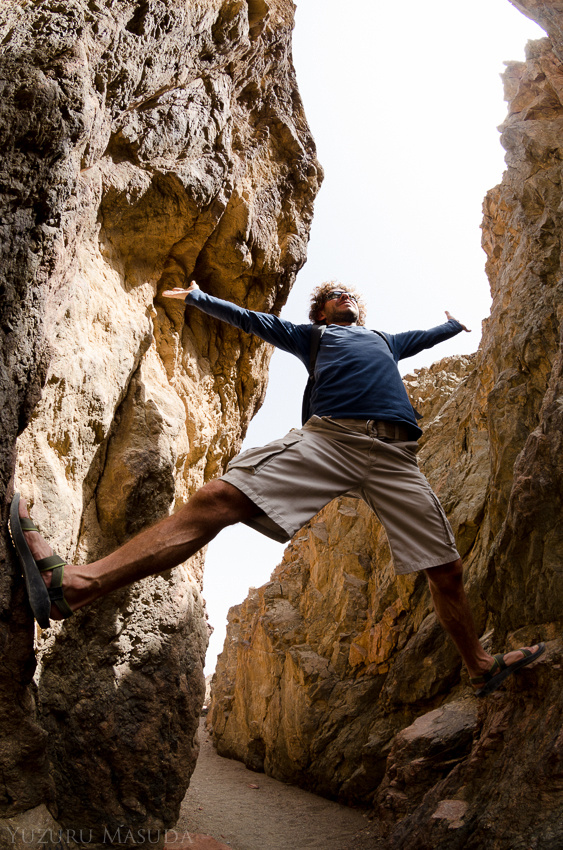 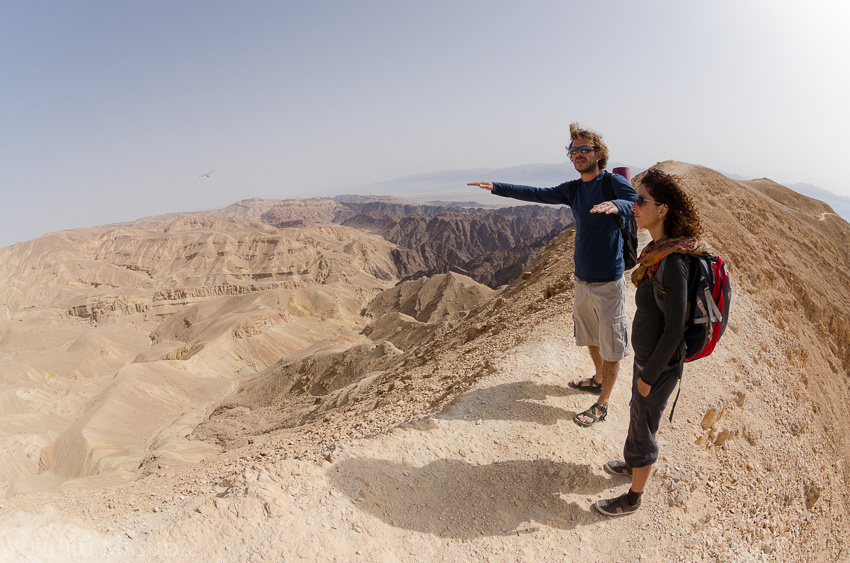 David, Zohar and I set out on the ascent in the morning on the 02/03/2013 from the entrance to the trekking path off the route 12 not far from the Egyptian border. Thanks to the moderate weather in March, it was fairy comfortable and enjoyable walk. It would have been a completely deferent story if it was in the summer as the scorching sun in the dessert can easily cause heat/Sun stroke to the trekkers. The absence of airplanes flying across the desert on Saturday morning added an extra depth to the vast view we enjoyed as we walked along the jugged rocky terrains. 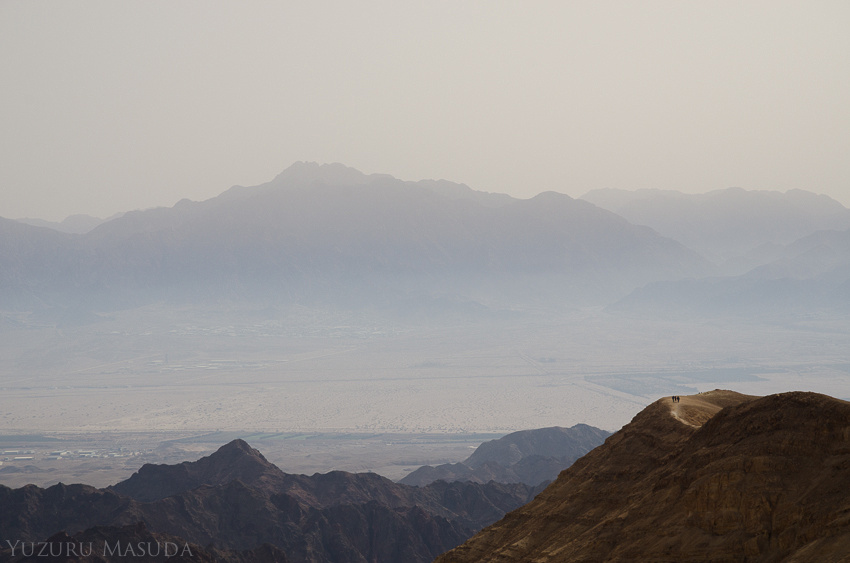 The view of Jodanian mountains from Eilat 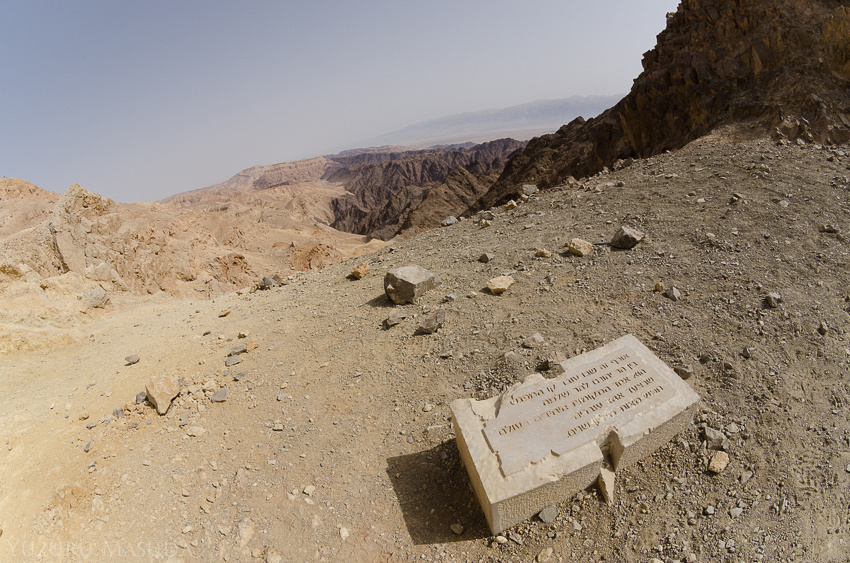 When we reached the summit, we took a break with some snack and water.  It wasn't long before Zohar and David started preparing the ground for performing Acro Yoga. Zohar has been practicing Acro Yoga regularly for sometime and she seems completely comfortable to do some of the acrobatic poses only couple of feet away from the cliff.  As the name suggests, it was indeed a very acrobatic form of yoga I never saw before. I crawled around them with my camera and snapped lots of shots. It must feel great to be able to stay in such flying like position on the top of the mountain with 360 degrees view. 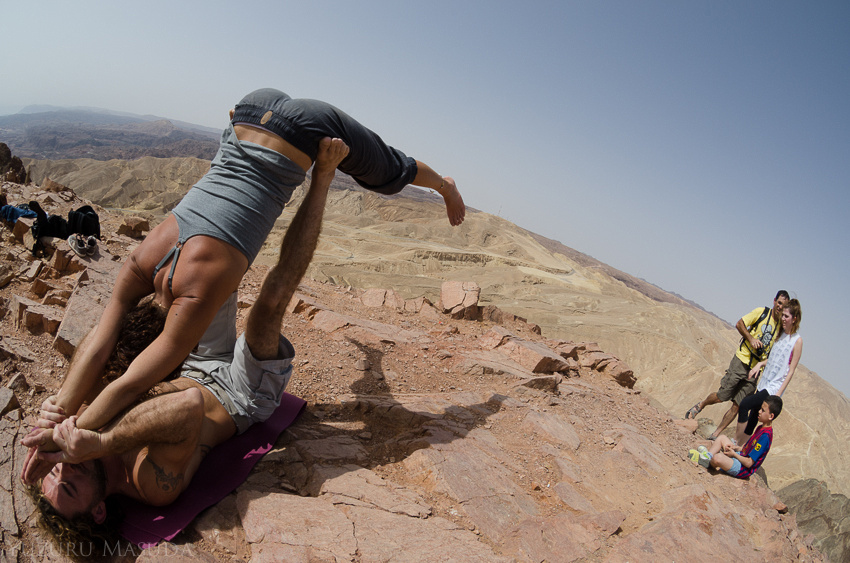 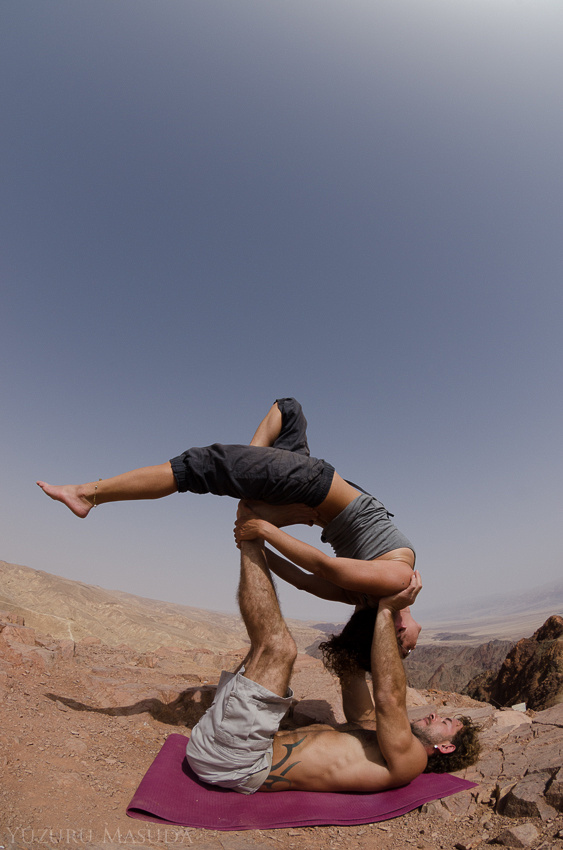 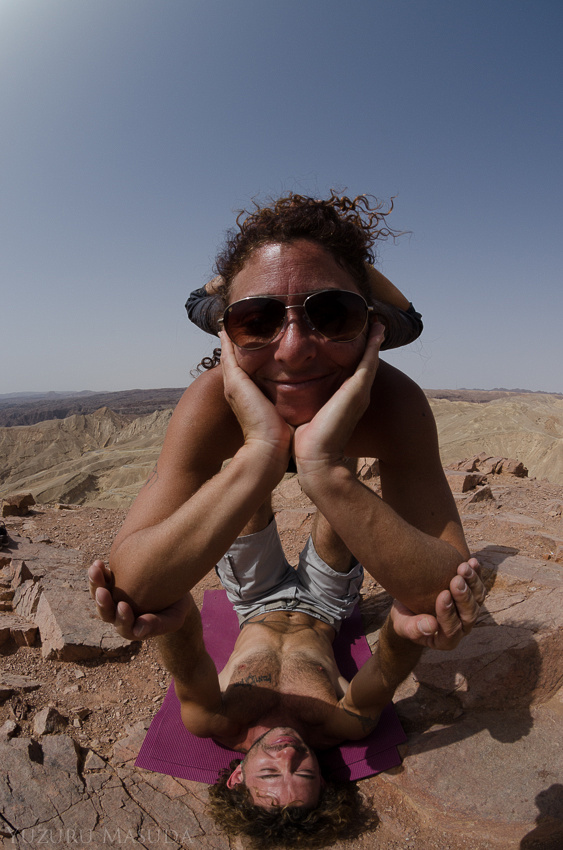 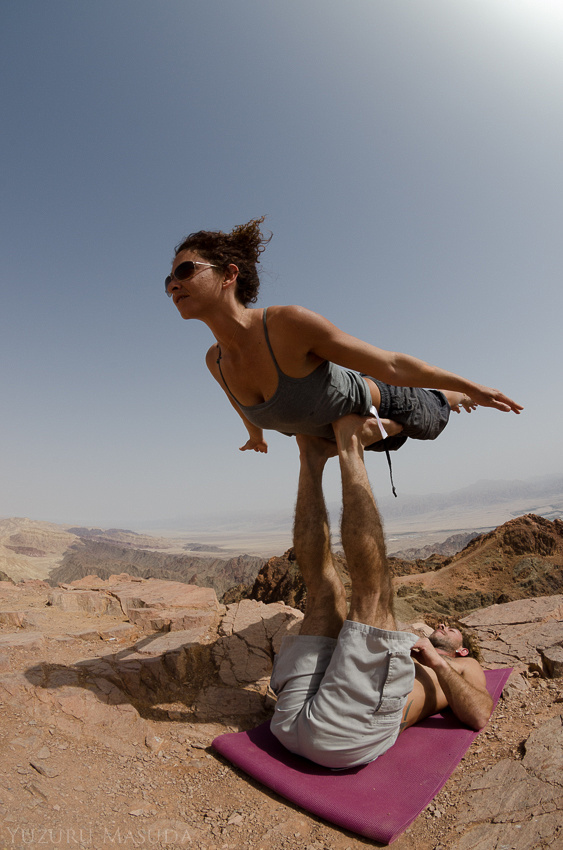 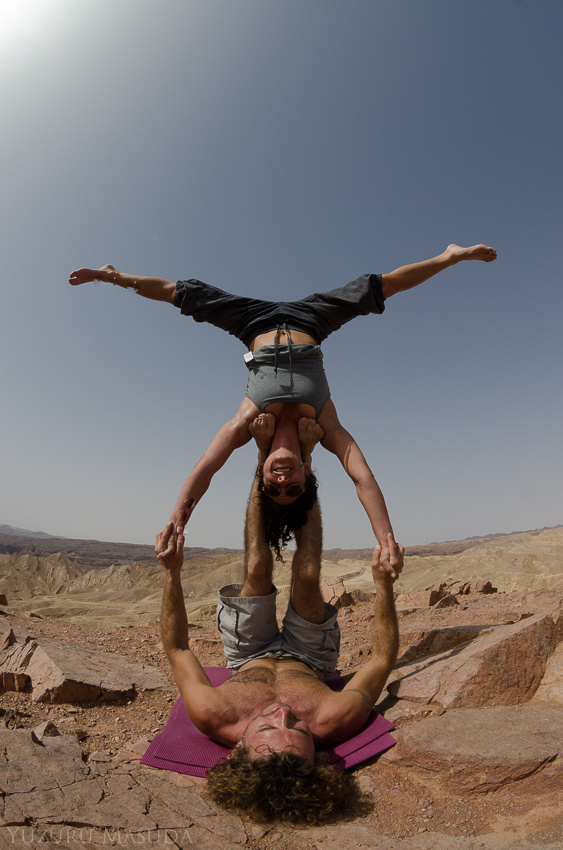 Acro Yoga on the Summit

We started descending along the steep trails with a few stops for water intake. When we walked further down along the path in the valley, we bumped into a preceding family group looking at something in an acacia tree.

I soon realised there was a long-eared owl perched on one of the branches. A young boy was taking some photos quite close to the owl. I hoped that I too would have a chance to take couple of shots afterwards. Unfortunately, my zoom lens's maximum focal length on the longest side was only 70mm. I just hoped The owl would let me get close enough from the top of the rock which was sitting just by the acacia tree. I approached the owl slowly while I was continuously talking to David and Zohar pretending I was not interested in him. The owl observed every movement of me approaching him with his eyes half closed but he did let me come as close as 5 feet (1.5m) to him. He remained composed and did not fly away as if to demonstrate that he is in total control of the circumstance.  I succeeded to take couple of nice shots with my eyes on the same level as his profoundly wise looking eyes! 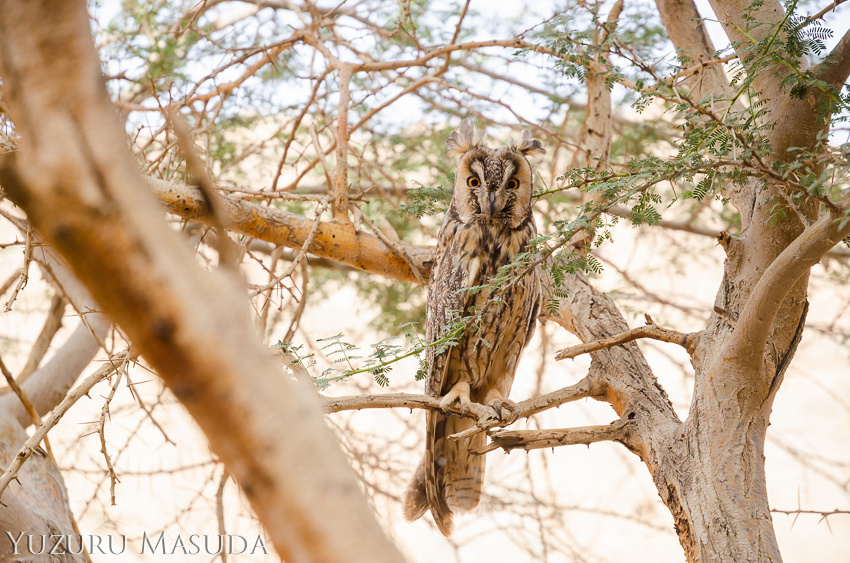 I was so lucky to have this opportunity to photograph such an intimate portrait of the Mr sage owl.. Then we continued our way back to Eilat city in the mid afternoon sun. 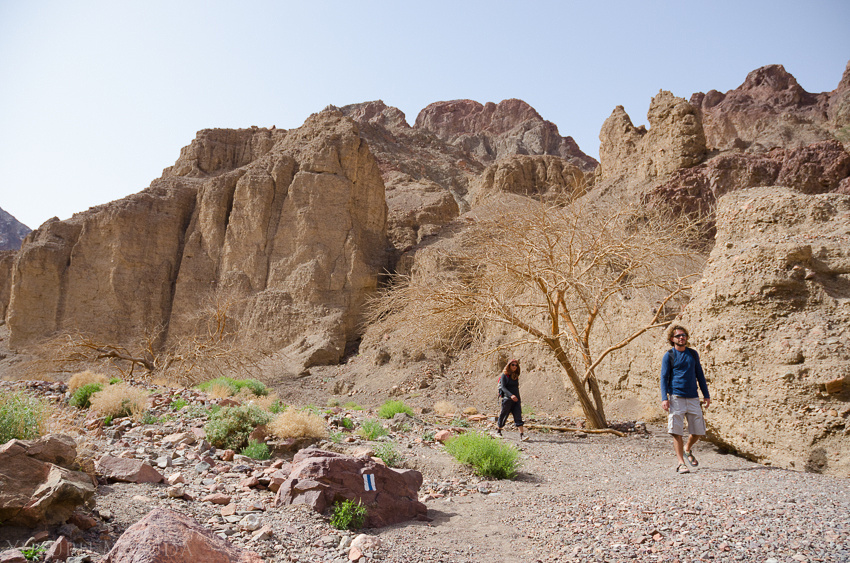 End part of the trekking path

Just as I (maybe all of us?) was thinking that it was getting a bit hot to get through the last bit of the way, David's friend coincidentally drove by and gave us the lift back to the city entrance! How lucky...

Many Thanks again to David and Zohar for a wonderful day!